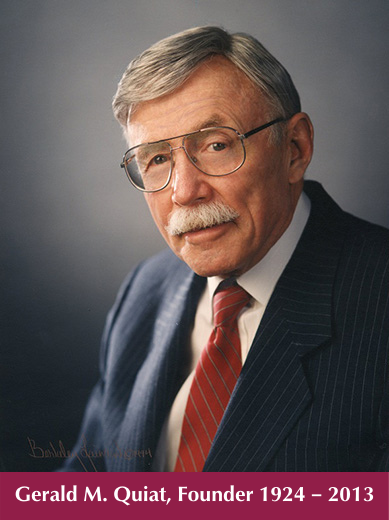 Gerry was born in 1924 in Denver, CO. He was a third generation Denver native with a father who was extremely active in politics especially in the areas of Civil Rights. Gerry attended Steadman Elementary, Smiley Junior High School and East High School. He then attended two years at University of California Berkeley where he lettered in soccer. He had enlisted in the military and was called for duty in 1943. He joined the 4th Platoon of Company E of the Rainbow Division and was deployed in Europe in 1944. He was captured during the Battle of the Bulge and placed in a prison camp from January until May of 1945 in a temporary camp near Stuttgart, Germany. He had pneumonia, hepatitis, and an intestinal disease and nearly died in the prison camp. During an air raid, Gerry escaped south to France where he fought with the French Resistance took a town from the Germans and made his way to the Allied Lines. He was in a Military Hospital for over a year to heal his illnesses.

Gerry was athletically active before the movement began. His illnesses from the prison camp left him with significant issues and he sought treatment from the Mayo Clinic where they were just beginning to study the benefits of exercise. They recommended that daily amounts of running and weight-training could heal him from his ailments. He became one of the first joggers in Denver, first athletic trainers at the YMCA and Jewish Community Center. He was physically active pursuing running and cycling and physical training until the last month of his life, and he bicycled extensively with his wife Bobbie in Europe.

While in Fitzimmons Hospital in Denver after the war, Gerry decided that he wished to pursue law at the University of Denver. He spoke with the Dean of the Law School who had pointed out that Gerry had no undergraduate degree and was therefore ineligible to attend the University’s Law School. He negotiated with the Dean for the University of Denver to grant him a BS degree as well as his Law degree if he graduated with a higher than “B” average. He graduated from the University of Denver in 1948 after making Law Review and began his legal practice with the District Attorney’s office as a Deputy District Attorney. He then joined his father’s private practice, Quiat, Seaman, and Quiat and after his father’s death opened his own practice, Quiat, Bucholtz, and Bull.

In the early 1980’s, Gerry left the practice of law to pursue business. He worked until February of 2012 when, at 88, he retired due to medical reasons. Gerry’s community involvement was extraordinary. He was on the Guaranty Bank Board, a bank which his father founded. He was the Chairman and President of Rose Community Hospital, a hospital that his father founded to allow Jewish doctors to practice in Denver. Gerry was appointed by Governor John Love to the Colorado Civil Rights Commission. He chaired the Commission enforcing fair housing laws and civil rights in the late 1960’s and early 1970’s. He was the President and Chairman of the Board for AMC Cancer Research and the Chairman of the Board of the Denver chapter of the Anti-Defamation League (ADL) and a Member of its National Executive Committee. He served as an ADL Mountain State’s Regional Board Member until the end of his life. He also served as the Chairman of the Board of the Colorado Ballet. He was also a Member of the Denver Rotary 31. In addition, he substantially supported the State of Israel and numerous Jewish organizations in Colorado. His legal affiliations included the Colorado and Denver Bar Associations, and he was the President of the Trial Lawyers Association.

Surrounded by his family, Gerry Quiat passed away on January 1, 2013, after a long battle with Alzheimer’s Disease.